Annual Report of our Activities in 2020 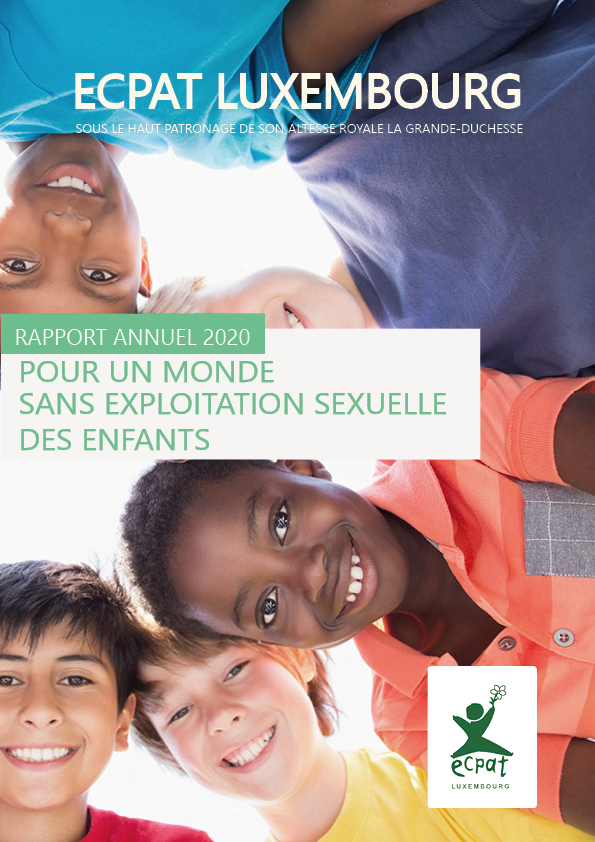 This is our activity report for the year 2020, that special year that painfully reminded us of our uniqueness as humans in the face of a global pandemic. We understood on this occasion that it is only with a global and united solution that we can fight the plague of COVID. It is for such a union that we work to end the sexual exploitation of children around the world and in our country as well.

In 2020, for example, we have seen two parallel phenomena: the pandemic that has increased vulnerabilities and a certain liberation of speech around sexual violence.

Effects of the pandemic

The pandemic has increased the vulnerability of the most vulnerable around the world. Indeed, on the economic level, the multiple confinements have led to the collapse of a whole range of survival economies, pushing the most vulnerable populations, mainly women and children, into even greater poverty. In terms of health, the difficulties of health systems to cope with the pandemic have impacted the poorest first. On the social level, this pandemic has increased violence, particularly within the family.

Our operational partners in the field have all had to deal with this increase in difficulties, while being impacted themselves. We must acknowledge here, and we do so in the report, their admirable work in these difficult times. They are used to working in difficult conditions and have shown exceptional adaptability and resilience in the new context created by the pandemic.

Our work in prevention, protection and rehabilitation of children has been all the more important during this period. To cite a terrible example: we take young women out of prostitution and help them find an economic activity such as opening a shop in Nepal. However, with the strict confinements these initiatives have been reduced to nothing and we have had to support these young women economically so that they do not return to a situation of sexual exploitation because of the lack of alternatives.ive.

These situations have multiplied in the Asian countries where we work, in India, Nepal and Cambodia, which have been greatly affected by the pandemic. We therefore had to unblock humanitarian aid activities to deal with these unprecedented situations.

Decreasing the taboo around sexual violence

On the other hand, the second major phenomenon of the year 2020 is the fact that there is relatively more talk about sexual violence and exploitation. The “MeToo” phenomenon comes to mind, but it was only a consequence or a continuation of a change in societal view of sexual violence. The pandemic was certainly also a catalyst as the media reported on the increased violence associated with the situation.

It seems that a step in the liberation of the word around sexual violence has been taken and it is a very positive movement because it is by giving visibility, by exposing a problem, that we can solve it. And it is since the beginning of our activities that we are working to break the taboo that surrounds this violence

Moreover, sexual violence has now become a cross-cutting issue on the political agendas of many countries, including Luxembourg.

Our awareness work is crucial here and contributes to this movement. On pourra citer les campagnes de sensibilisation pour le grand public et des publics cibles que nous développons au Cap-Vert et au Nigéria et que vous pouvez lire en détail dans notre rapport. And we also mention the advocacy work we do with the authorities of the countries in which we work, including in Luxembourg with the drafting of an alternative report on child protection for the United Nations.

This awareness of the importance of protecting potential victims of violence is also conducive to the establishment of procedures and measures to protect children. For example, last October we launched a vast national project in Nepal, with the Nepalese government, to ensure that all childcare facilities are strengthened and have protection procedures. We are doing the same work in Luxembourg with, at the moment, the sports structures.

The impact of new technologies

It should also be noted that our work to fight this scourge of sexual violence is all the more important because new technologies have made it explode. Access to the Internet, which is developing even in the least privileged countries where we work, allows new forms of violence.

We mention grooming and sexting against which we raise awareness among young people in Luxembourg and elsewhere in the world. But we also notice that pedophiles can now stay at home and order abuse from their homes: this horror is on the rise according to Interpol. And on the prostitution front, we realize that containment does not prevent the demand from continuing: in Goa, we have seen prostitution move to the Internet to connect supply and demand.

We must also confront, with our partners, these new forms of sexual violence and exploitation.

Finally, as we have seen, our work is part of a social movement: we are all responsible for the children around us. And so, every person can have a role to play, by taking responsibility for the protection of children, whether in their family and social environment, at home while surfing on the Internet or when traveling abroad. And it’s important to remember that today, on the eve of the vacations, we have set up a child abuse reporting site: www.childprotection.lu.

We remain at your disposal for any questions you may have and we hope that the coming months will see the end of the COVID pandemic and the end of the pandemic of sexual violence against children.