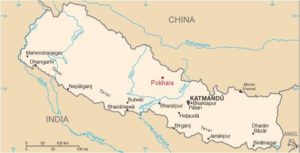 Pokhara, located in the foothills of Annapurna, is a famous tourist centre that attracts a large number of international and national tourists for its views of the mountains and natural lakes. Pokhara is also an economic hub for migrants from western Nepal, many of whom arrive at work in the tourism and hotel sector. It is noted that this migration to Pokhara has increased from the districts affected by the devastating earthquake of 2015, particularly the neighbouring district of Gorkha, where the epicentre of the devastating earthquake was located (see second photo). Pokhara is therefore a strategic point of intervention because of its proximity to all the districts affected by the earthquake. Unfortunately, trafficking in human beings in Pokhara was reported to have increased after the earthquake. People at risk of trafficking are also children and adolescents who have been attracted to the city by the various agents and sources who have made them promises of work and other economic opportunities.

In its latest report on trafficking in human beings, the National Human Rights Commission of Nepal reports that all police stations in the earthquake-affected districts (14) reported that the number of missing children has increased by 40 per cent compared to the average number of missing children in the last three years just before the earthquake. [1]

The “adult entertainment” sector in Pokhara is dynamic and growing, for tourists from Nepal more and more, but also from India and elsewhere. Child protection actors and researchers working in Pokhara report that small hotels, guest houses and dance bars in and around bus and truck fleets or tourist areas such as the lake region have become hubs for the sex trade.

Shakti Samuha, an association founded by survivors of trafficking for sexual purposes.