BUT WHAT IS CHILD SEXUAL EXPLOITATION…? 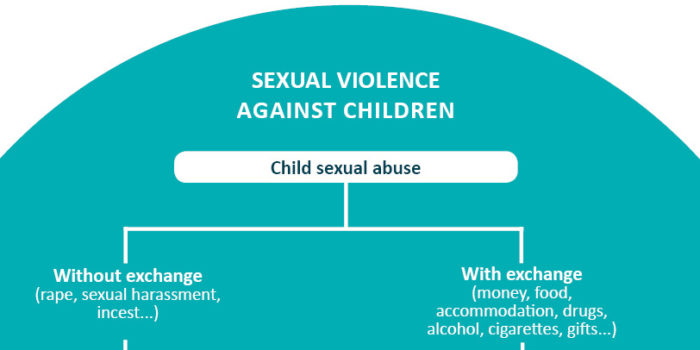 First of all, it is important to note that a child is defined in international law as being a person under 18 years old.[1] Secondly, a child is a victim of sexual exploitation when (s)he takes part in sexual activity in exchange for something from which the child or a third party benefits. This may be money but it could also be food, accommodation, drugs, alcohol, cigarettes, gifts, or even just the promise of such. The victim is not only perceived as a sexual object but also as a commodity with a commercial value.

The sexual exploitation of children can take many forms and is constantly evolving particularly with advances in new information and communication technologies but it can be broadly divided into the following categories.

The exploitation of children in prostitution is defined by the Optional Protocol to the Convention on the Rights of the Child on the sale of children, child prostitution and child pornography as “the use of a child in sexual activities for remuneration or any other form of consideration”. Children may be controlled by a pimp and the prostitution may be organised by criminal networks but this is not always the case.

The sexual exploitation of children in the context of travel and tourism (SECTT)occurs when a child is exploited sexually by a person who is travelling from once place to another. This form of child sexual exploitation is also sometimes described as child sex tourism and typically provokes images of children and young people being exploited in tourist destinations such as Thailand. However, we recommend avoiding this term as the perpetrators of this form of child sexual exploitation are not always tourists or even foreigners (http://luxembourgguidelines.org/). Perpetrators may be businessmen/women, backpackers, NGO workers, military, temporary residents etc. They may be travelling in a foreign country but they may also be travelling within their own country.

The trafficking of children for sexual purposes involves the recruitment, transportation, transfer, harbouring or receipt of a child, with the intent of exploiting her/him sexually. Threats, force, coercion, abduction, fraud, deception or abuse of power may be used to “recruit” the victim.[3] A victim may be trafficked across national borders but as with SECTT, human trafficking can also occur within the same country. A victim may be transported from one town or region to another town or region.

Some child/early/forced marriages may also be categorised as child sexual exploitation in certain circumstances particularly when the family benefits from a dowry.

Child pornography is defined by the Optional Protocol on the sale of children, child prostitution and child pornography as “any representation, by whatever means, of a child engaged in real or simulated explicit sexual activities or representation of the sexual parts of a child for primarily sexual purposes”. This definition includes not only visual materials such as photographs, films and drawings but also audio recordings, live performances, written material and physical objects. It is worth noting that Interpol insists on using the term “child abuse material” rather than “child pornography” as such images depict children who are victims of a crime. Using the term “porn” or “pornography” in this context can trivialise the abuse as these are terms used for adults engaging in consensual sexual acts distributed (mostly) legally to the general public for their sexual pleasure.[4]

In addition to online child abuse images, the online sexual exploitation of childrencan also take other guises. Information and communication technologies provide new opportunities to offenders for sexually abusing or exploiting children or young people. The term “grooming” refers to the process of establishing a relationship with a child or young person in order to gain their trust and confidence with a view to abusing or exploiting them sexually. Child sex offenders are increasingly using online grooming methods, for example, using online social networks, chat rooms and video games to come into contact with and gain the confidence of a potential victim. Victims may be enticed or manipulated into engaging in sexual acts online (by webcam) or sending explicit images of themselves. “Sexting” which is the exchange of sexual messages or images by mobile phone or the internet is not necessarily illegal or socially unacceptable when this occurs without coercion and between two consenting individuals but there are risks that any such content may be circulated online or offline or used for blackmail or extortion.[5]

Links between the different forms of child sexual exploitation

Although it is important to conceptualise and define child sexual exploitation in order to be able to understand and combat it more effectively, we also recognise that the boundaries between child sexual abuse and child sexual exploitation are blurred as are the boundaries between the different forms of child sexual exploitation described above. The aforementioned forms of abuse and exploitation are often not distinct but can also be interrelated. For example, research shows that children who have been victims of sexual abuse may be more at risk of sexual exploitation in some circumstances. The victims of persons who exploit children or young people sexually while travelling are often minors already exploited in a local prostitution industry used mostly by nationals. Children who are victims of sex trafficking may be trafficked from one region or country to another in order to feed local prostitution (for example, young girls are trafficked from Nepal to be exploited in prostitution in India). Finally, live streaming of children being abused sexually in countries such as the Philippines or Thailand means that it is no longer necessary for a perpetrator to travel to such a country in order to exploit a child. As such, we are aware of the limitations of presenting such definitions and that the way in which child sexual exploitation manifests itself is constantly evolving especially with the development of new technologies (live streaming would not have been possible 10 years ago, for example). However, as expressed in the Terminology Guidelines for the Protection of Children from Sexual Exploitation and Sexual Abuse we also believe that : “Words matter because they affect how we conceptualise problems, prioritise issues and forge responses”[6]

[1] United Nations Convention on the Rights of the Child

[2] Terminology Guidelines for the Protection of Children from Sexual Exploitation and Sexual Abuse.

[3] Directive 2011/36/EU of the European Parliament and of the Council of 5th April on preventing and combatting trafficking in human beings and protecting its victims.