Breaking the silence around underage girls exposed and/or victims of commercial sexual exploitation in Mali (Bamako, and the regions of Segou, Sikasso, Mopti)

Fanta (the first name has been changed), 14, from Bamako is one of these exploited young girls:

I was a street vendor for my mother at the S… market in Bamako. I had to leave school after my father’s death because my mother could no longer pay for my studies. To help my mother with the expenses of the house, I used to hang merchandise at the Great Mosque of Bamako where I sometimes stayed late at night. It was other girls who were involved in prostitution, who encouraged me to prostitute myself at night, first at the big market in Bamako and then in a bar and since then I have always prostituted myself in the bar. I help my mother with the daily expenses. I would like to have a dyeing training to leave this job.

Bamako, Segou, Sikasso and Mopti. These cities are selected because they meet one or more of these criteria: economic and tourist attractiveness, border proximity, gold sites with a prevalence of children exposed and/or victims of commercial sexual exploitation. 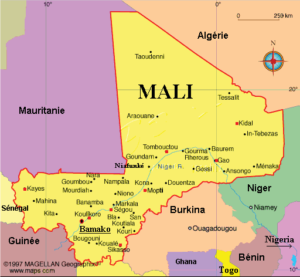 The Malian population is characterized by its extreme youth: the under-18s represent more than half (53.0%) of the 15.84 million inhabitants. The under-15s alone represent 46.6% of the population[1].

Unfortunately, Mali is not spared from the sexual exploitation of its children, and many of them are among the millions exploited around the world every year. A quantitative and qualitative study that we carried out in March 2013 shows that 28.3% or 417 children out of 1472 children in the sample were victims of prostitution and trafficking for sexual purposes. More than 90% of these victims are girls. Girls between the ages of 12 and 15 are very often sexually abused in exchange for protection, material goods or simply money: a 1,000 CFA note or 1.45€ is the price of sexual abuse.

Children who are victims of sexual exploitation are children who, for the most part, have suffered physical and psychological abuse, including sexual abuse in the family, children from broken, reconstituted or completely separated from the family. Others come from families living in precarious economic situations. For many, it is children who find themselves on the street for different reasons, while others are forced to do so to provide for the family’s basic needs.

The consequences of the commercial sexual exploitation of children are multiple. An abused child is a child raped in the flesh and soul, and sexual exploitation significantly disrupts the psychological, physical and social development of the child victim. A multidisciplinary approach to the care (psychological, health and social) of these child victims is therefore essential to enable the child victim to build himself, rebuild his bearings and regain confidence in himself, society, life and above all his own life.

Strengthen the protection (prevention, psychosocial care, reintegration   and rehabilitation) of underage girls at risk and/or victims of sexual exploitation

Samu Social Mali: Samu social Mali aims to combat the social exclusion of street children and young people, boys and girls from 0 to 18 years of age, and sometimes beyond this “legal” age, especially for young girls/young mothers living and sleeping on the streets of Bamako. The team provides medical, psychosocial and educational assistance to these children and young people in their place of residence, thanks to an emergency night intervention, supplemented by daytime follow-up, through both medical and psychosocial care, in particular support, referrals to a network of specialised partner structures.

BNCE Mali (Catholic National Bureau for Children): Organization committed to the promotion and protection of the dignity and rights of the child in Mali, which is also a member and partner of the BICE network (International Catholic Bureau for Children). The BNCE will take in girls identified as at risk and/or victims of sexual exploitation in their centres in Ségou, Sikasso and Mopti.

CARITAS Mali: AET (Action Enfants de Tous) Bamako: Caritas Mali has launched an initiative called Action Enfant de Tous (AET) which coordinates the social and development actions of the diocese of Bamako. The girls’ home in Bamako will accommodate girls identified as at risk and/or victims of sexual exploitation in the Bamako district.

AV.ES: Avenir Enfance du Sahel: As a partner of ECPAT Luxembourg since June 2007, AV.ES is a national NGO working to protect and promote the rights of the child at the national level. It will act upstream mainly in the Mopti and Douanza region (region providing very young migrant girls from 9 years of age!) with community leaders, communities and families.