ECPAT Luxembourg has initiated a three-year project ‘Surakcha ko lagi Sath Sath’ ‘Together for Protection’ in Nepal with the support from the US State Department. The goal of the project is the formation of strong government mechanisms and structures at provincial and local levels in Nepal that ensure comprehensive services to victims of trafficking, particularly children.

The project was launched via Google Meet on Wednesday (17 February 2021), in presence of His Excellency Mr. Randy Berry-U.S Ambassador to Nepal, Ms. Valérie Heyman Deputy Head of Mission-Embassy of Luxembourg for India and Nepal in New Delhi, and other notable project implementation parties. The program highlighted the project goals, activities and project implementation areas. The project aims to improve protection, prosecution and standards of care in children’s homes including orphanages with potential risks of child trafficking by strengthening Nepal’s provincial and local anti-trafficking in person (TIP) and child protection (CP) structures and mechanisms. Ms. Charimaya Tamang, the TIP Hero of 2011 who has been working as an activist against trafficking in persons for more than a decade also underlined the importance of this project for preventing trafficking of children and strengthening child protection responses in Nepal.

The project will be implemented with two implementing partners, Shakti Samuha and the Center for Legal Research and Resource Development (CeLRRd), in close coordination with the National Child Rights Council (NCRC) – an apex government body under the Ministry of Women, Children and Senior Citizens, with the mandate to protect and promote rights of children in Nepal.  Direct interventions will focus on three specific provinces (3,4 and 6) where the highest number of children’s homes are located (Situation of Children in Nepal, CCWB Report 2018). Twenty local government units in 11 districts (Makwanpur, Kathmandu, Lalitpur, Bhaktapur Kavre, Rasuwa, Dhading, Chitwan, Gorkha, Kaski, and Surkhet) have been pre-identified for direct intervention based on two specific criteria: the high number of public children’s homes (destination) and vulnerability of the local population (source districts).

Mr. Randy Berry, U.S Ambassador to Nepal, focused on the importance of protecting and promoting the rights and interests of thousands of children living in Nepal. He said, “The project will help Nepal to fulfil its mandate to protect and promote the rights and interest of the child by providing support for establishing screening standards, supporting awareness campaigns, conducting investigations into illegal orphanages, holding operators accountable, and finally by supporting reunification of children with their families.”

Similarly, Mr. Milan Dharel, the Executive Director of the NCRC, speaking on behalf of the Ministry of Women, Children and Senior Citizens said, “I am hopeful that the project ‘Together for Protection’ would enable us to expand the child protection mechanism at the local level, revise existing child protection policies and at the same time, enhance the capacity of local government leaders and officials to combat child trafficking”.

Meanwhile, Mr. Thomas Kauffmann, the Executive Director of ECPAT Luxembourg emphasized how Nepal had undertaken actions to respond to trafficking in persons by signing the Palermo Protocol and setting up protection mechanisms at provincial and local levels. 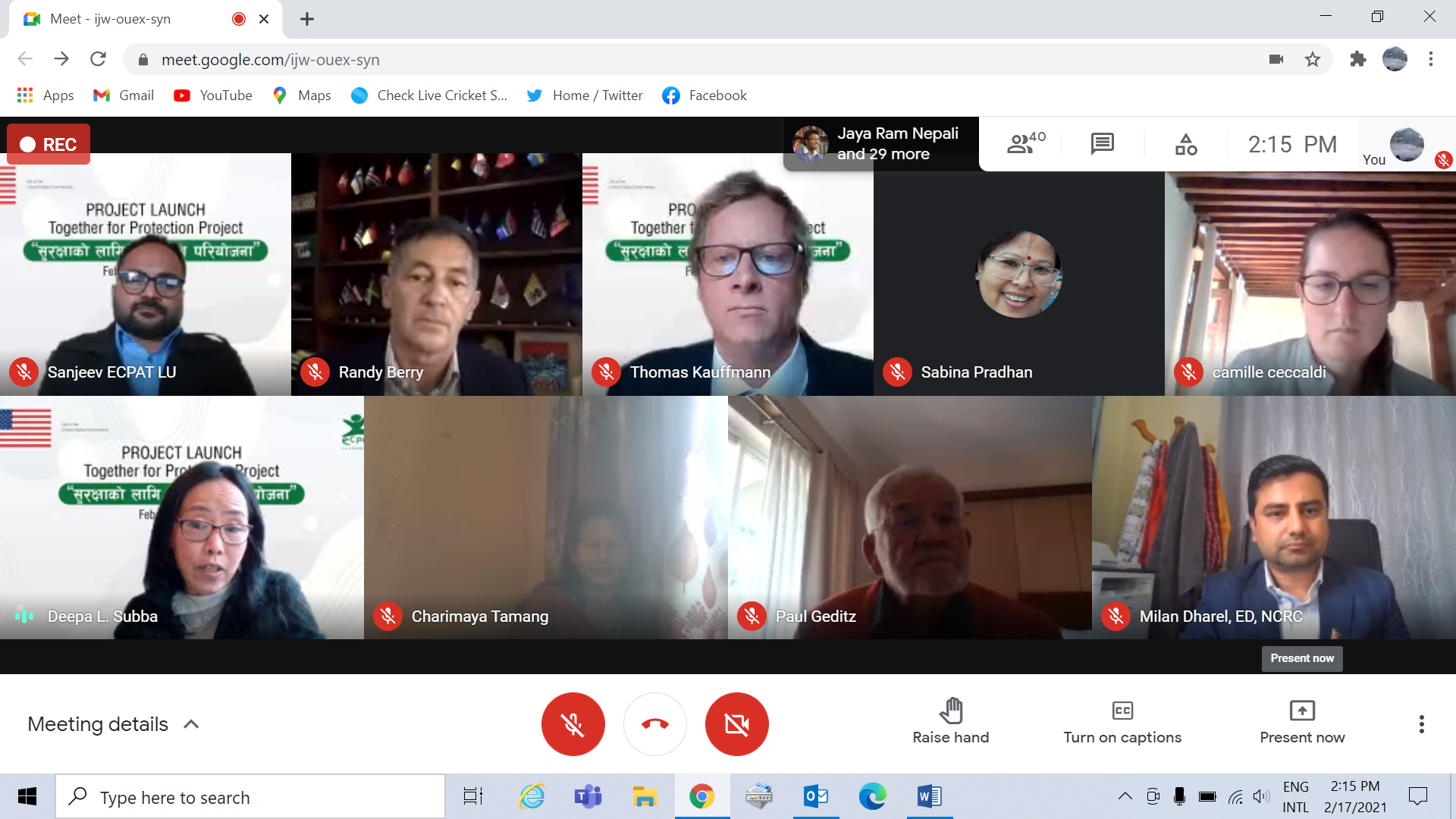